💡
To make your solos distinct and impressive, you need to know the tricks of the pros. Here at RealWorldMusicTheory.com I will teach you a lot of these tricks. And if you're serious about advancing your solos to the next level, reserve a free Zoom session with me, so we can work on your individual style together!

How NOT to do it

You might be tempted to tackle soloing over such a progression by identifying the scales for each chord and then using their notes as your available tone material. This would give you the scales F dorian, Bb mixolydian and Eb ionian (or major). Don't worry, these scales all have the same notes 😉 – they just start on different keys. In essence you would use the Eb major scale over the whole chord progression.

But this scalar approach to playing can easily end up in scale running – and you definitely want to avoid sounding like an amateur by running up and down the scale! So here comes a trick to make you sound much more professional…

How the pros do it

This scale works well over each chord of our progression and at the same time emphasizes different notes on each chord. For example on Fm7 it emphasizes the 9 and 11 – two notes the pros use all the time on a minor 7 chord to sound sophisticated! On the Bb7 our scale emphasizes the 9, 11 and 13 – again making you sound less like an amateur who only plays the triad notes. On the Ebmaj7 finally, it emphasizes the the 6 and 9 as well as the third (which it avoided on the two earlier chords).

The little blue note – the gb or f# – lends itself especially well to approaching the f and g. You can add little grace notes, which instantly change the feel of your solo.

With this scale under your fingers, you need to put much less thinking into choosing good sounding notes and phrases, because the Cm blues pentatonic scale instantly gives you a professional sound. And freeing up some of your brain power that way, you can focus on other important aspects of your solo like the form of your solo, your arc of tension or to interact with the other musicians.

To really make use of this soloing trick, you do not only need to know about it, but you need to get it into your fingers!

If you cannot fluently play the minor blues pentatonic in common keys yet, you should practice it for 5-10mins every day. Just walking up and down the scale should show quick results after one or two weeks.

Once your fingers know the scale, go ahead and play over various chord progressions. The chord progressions should be diatonic, meaning all chords should be from the same key (like Fm7, Bb7 and Ebmaj7 all were chords of the Eb major key). Either accompany yourself with the left hand (if you're a piano player) or use play-a-long tracks. At your next rehearsal or gig make a conscious effort to use the minor pentatonic scale as much as you can – this will help you get fluent with this new trick and ingrain it into your style repertoire.

While practicing the scale over certain chord progressions, listen to which feelings each note creates for you. Develop your own taste of which notes you like to play over which chord. For example I love the 9th on the m7 chord, but I try to play the 6th on the maj7 chord less frequently. This is all a matter of taste, because the genius of this trick is, that none of the notes sounds wrong or bad! All notes sound good over all chords. With that out of the way, you only have to decide, what you personally like better and what you want your personal soloing style to sound like :).

Why does it work?

Why can we use a seemingly unrelated scale over an Eb major progression? And what music theory secrets help us to sound so sophisticated by using the scale?

Before we add in the "blues" again, let's first look at what the C minor pentatonic scale does in relation to the root of each chord:

On Fm7 the notes of the scale represent the

Notably we're avoiding the third of the chord and also the 6th. You already learned that the 9th and 11th sound great over a m7 chord. We also have the root, 5th and 7th as less unstable tones to end our phrases on, in case we want to resolve some tension.

On Bb7 the notes of the scale represent the

Again we miss the third and also the 7th. Instead of the third, we automatically have the 11th, which adds extra tension to a dominant chord like this. The 9th and 13th are two more sophisticated notes that you might not have picked just by looking at the chord symbol of Bb7. The root and 5th give us stable points to start or end our phrases on, should we desire less tension.

On Ebmaj7 the notes of the scale represent the

This time the minor pentatonic scale gives us the third of the chord, which is very important on a tonic chord like Ebmaj7! So the scale automatically helps us to sound good and choose great notes. It also gives as the root and 5th, so provide even more stable tones on a tonic chord . The chances for a random phrase of ours to resolve nicely to a stable chord tone are 60% – significantly higher than the 43% we get with a regular major scale (sorry, the little maths nerd came out in me 🤓). And the added tensions are not bad either: a 9th sounds wonderful on a maj7 chord and the 6th is a substitution for the maj7th the pros use frequently.

Now let's add in the "blues"! This tiny extra gb/f# effortlessly leads you to a professional solo sound. On the Fm7 and Bb7 it gives you an awesome double chromatic approach to the sophisticated tensions 9 and 13. Doing little grace notes on f and f# up to g add color to your solo. You can also just slide up from the f# directly – a nice trick on the piano is to simply let your finger slide down from the black key (f#) to the white key (g). For the Bb7 chord, the f# also adds another welcomed tension for a dominant chord, even if you emphasize it more.

On the Ebmaj7 chord, the blue note f# gives you a nice approach towards the third of the chord. The third – as you might already know from my little songwriting email course – is THE go to note to end phrases on, if you're looking for great melodies. And preparing that note with a double chromatic approach demonstrates insight and musical mastery to your audience.

Only knowing your available scales for each chord is not enough! You also need to know when and how to creatively apply these scales and which other approaches you have to make your soloing interesting. Using the minor blues pentatonic scale of the relative minor of your progression is one such trick. You end up with phrases that sound more sophisticated, you avoid the dreaded scale running and you free up cognitive brain power to focus on other important aspects of soloing. All in all, a trick like that will improve your solo playing considerably.

I will leave you with that. And don't forget to practice and – most important of all – have fun with making music!

As a musician and songwriter you needs to have a repertoire of intros and outros. This article presents another wonderful ballad intro to add to your bag of musical tricks: I VI ii V

Paid-members only
Every musician and songwriter needs a bunch of intros and outros for songs. Whether you tag them onto your own compositions or use them when covering other musician’s songs, well crafted intros and outros make a performance much more sophisticated. 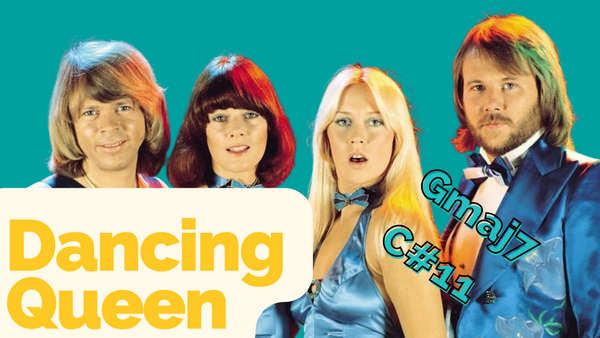